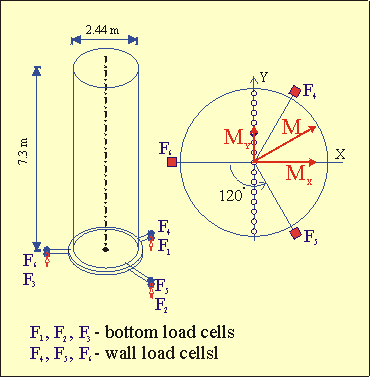 Investigations on model silos have been conducted in the Granular Mechanics Laboratory of the Department of Biosystems and Agricultural Engineering at the University of Kentucky, USA. The majority of tests were performed on smooth and corrugated-walled model silos 2.4 m in diameter and 7.3 m high.
The wall and floor of the silo were each supported independently on three load cells to isolate the wall and floor loads. Such an experimental configuration allowed for determination of vertical wall and floor loads, and of the resultant moment exerted by grain on the wall and floor of the silo. Moment of force was a global measure of the asymmetry of pressure distribution. The silos were filled to a height to diameter ratio (H/D) of 2.75 for each test, except for tests with non-axial filling. The wall loads were compared for: centric and eccentric filling, centric and eccentric unloading and unloading through the wall flume. 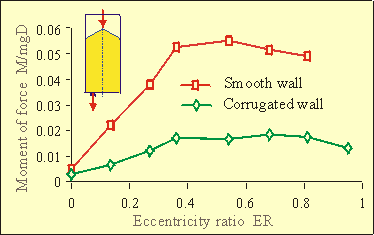 Eccentric discharge of the silo generated strong asymmetry of loads. As suggested by silo users, such loads asymmetry may lead to ovalization of the wall, and after a longer period of operation or in the case particularly high loads may cause silo failure. The wall bending moment was found to be the highest for the discharge orifice located at half the radius of the silo floor. Smoother silo wall resulted in larger asymmetry of load distribution.

Non-axial filling of the silo was also found to produce asymmetric load distribution. This asymmetry is a result of anisotropy of the bedding of granular material produced by grains rolling along the surface of the cone of natural repose. The potential for eccentric filling to decrease load asymmetry during eccentric discharge was investigated. Results of the experiment are shown in the figure. The red line represented the resultant moment of force exerted by grain on the silo wall during discharge when filling and discharge gates were located on the same side of the silo. Load asymmetry increased momentarily after opening the discharge gate. The green line represented the wall moment versus time relationship for the test when the filling chute was located on the opposite side of the silo from the discharge gate. For this condition, load asymmetry decreased at the onset of discharge. By unloading on the opposite side of the silo from where it was filled, load asymmetry generated by eccentric discharge may be decresed.

During periods of silo operation the wall is smoothed and covered by an organic substance originating from the grain surface. As a result the coefficient of wall friction decreased, and the vertical wall load decreased as well. Particularly high changes take place during the initial period of silo operation. The comparison presented in the figure showed that experimental values of loads are in good agreement with theoretical estimation by Janssen?s equation applying measured values of pressure ratio and coefficient of wall friction.