Discrete element method (DEM) is a family of numerical methods for computing forces and displacements in an assembly of large number of particles. Example of particles are:

Efficient application of discrete element method (DEM) for modeling behavior of granular materials requires application of contact models reflecting real behavior and realistic material parameters. In the case of materials of biological origin their mechanical behavior was found to be under strong influence of moisture content. Laboratory tests and numerical DEM simulations have been conducted to evaluate regions of validity of two basic contact models to describe impact behavior of rapeseeds at four levels of moisture content ( of 5.5%, 7.5%, 14.7% and 34.0%). Seeds were dropped by free fall on the flat surface of the force transducer from the height of 21 cm. Values of impulse force versus collision time were recorded with oscilloscope. DEM simulations  were introduced to fit various contact models to experiments. Elasto-plastic model was found to describe fairly close impact of dry seeds while in the case of wet seeds visco-elastic model gave proper fit (Fig.1). Efficient criterion for the model selection was a ratio TR of fall time to rise time of contact force – time characteristic. TR lower than 1 calls for elasto-plastic model, while for TR greater than 1 visco-plastic model should be applied. Coefficient of restitution of energy depends on impact velocity. Rate of decrease of cefficient of restitution differs for elast-plastic and visco-elastic models and depends strongly on damping parameters (Fig. 2). 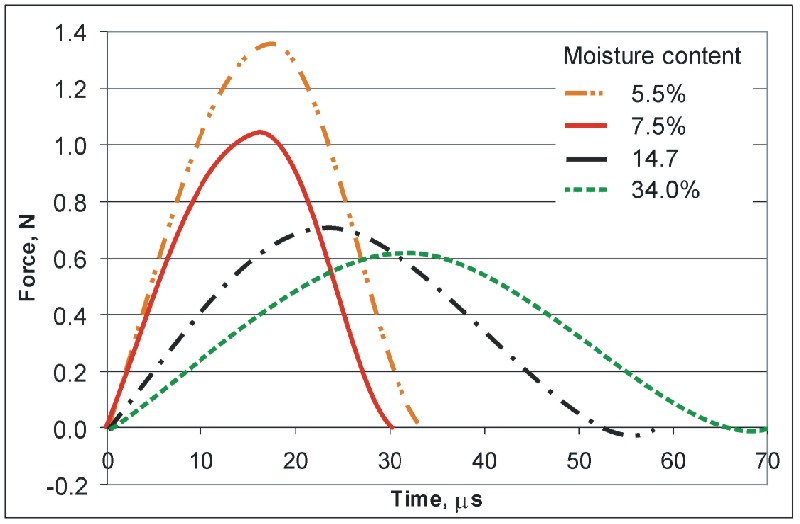 Fig. 1. Force – tme relation during collision of rape seed with flat plate. for 4 levels of moisture content of seed. 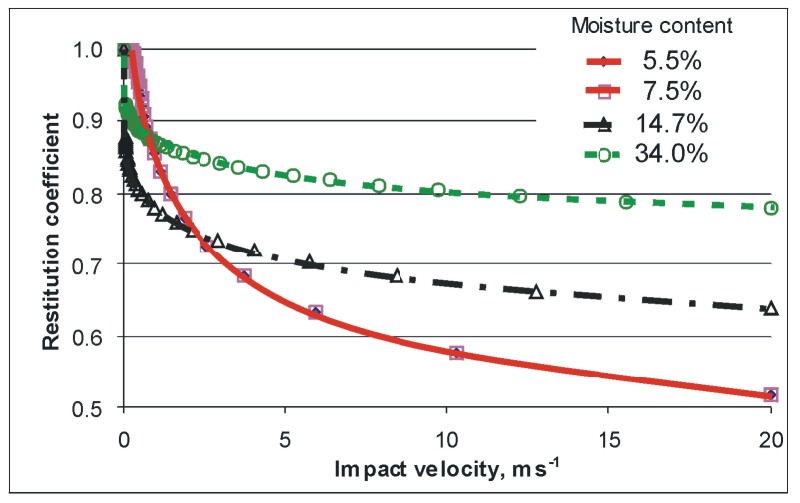 Fig. 2. Distribution of normal directions in assembly of particels generated by a) central, b) distributed filling

The method of generation of assembly determines many experimentally observed processes, however experimental methods don.t provide opportunity for obtaining information about distribution of particle orientation and interparticle forces.The central and sprinkle discharge processes of two-dimensional silos filled with circular elements was modeled. Simulations were carried out for coefficient of particle to wall friction of 0.1 and 0.7. Numerical tests were conducted with particles whose material parameters were close to parameters obtained for granular plant materials. Orientations of contact normals concentrated along three directions forming a nearly hexagonal network in the bedding generated by central filling. In the case of sprinkle filling a higher anisotropy of contact normals was observed.

Fig. 3. Distribution of normal contact forces during initial phase of discharge of silo with a) smooth, b) rough wall.

In the case of smooth walls (μ=0.1) a concentration of the highest forces was found in the lower part of the silo, while for rough elements (μ=0.7) high intergranular forces appeared also in upper regions of the assembly. Coefficient of friction considerably influenced the distribution of normal forces in contact points between grains, its increase resulted in an extension of the region of higher forces. 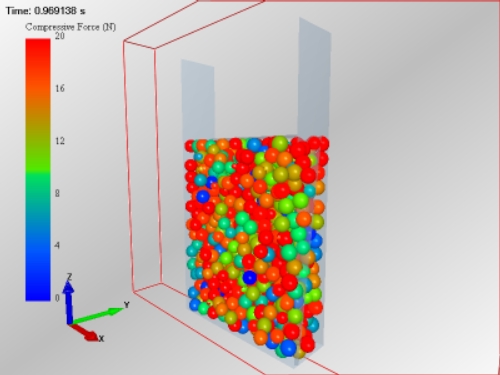 The structure of assembly is one of the most important factors influencing behavior of grain assembly. It is determined through mechanical properties (modulus of elasticity, friction coefficient, etc.) and geometrical parameters of grains (size, shape). The structure of assembly affects strength, stress-strain relationship, load response, type of flow and other processes.
Influence of thickness of grain bedding and particle shape on pressure ratio in uniaxial compression test for three-dimensional systems was examined.
Simulations for spherical and elongated particles were conducted. The latter one were composed of 2 or 3 overlapping spheres providing aspect ratio of 1.6 and 2.12. Uniaxial compression test in rectangular box filled with monosized particles was modeled due to lid moving with constant speed downwards up to the vertical lid pressure of 100 kPa. The software of DEM Solutions. Ltd company was used for research. 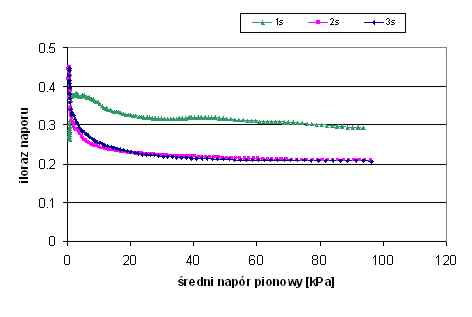 Increase in aspect ratio of grain from AR=1 (1s) to AR=1.6 (2s) resulted in approximately 25% decrease in pressure ratio. Further elongation of particles to AR=2.12 (3s) did not change values of pressure ratio.

Model of elastoplastic contact, as described in the article Wojtkowski M., Pecen J., Horabik J., Molenda M.: Impact of rapeseed against flat surface: Physical testing and DEM simulation with two contact models. Powder Technology, 198, 61-68, 2010, was implement in PAPA. PAPA program was established at the Institute for Computational Physics in Stuttgart and was released under the GPL. PAPA source code, with elastoplastic model, can be downloaded here.