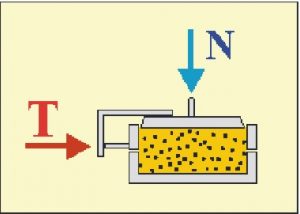 The angle of internal friction depends on the properties of individual particles and on the geometrical structure of the bedding. In the case of cereal grains factors that influence physical properties of kernels are: moisture content, genus, variety, state of maturity and conditions of cultivation. Factors that effect density of packing and spatial structure of arrangement of grains are: bedding formation, moisture content, pressure and time of storage. Dry cereal grain is in general considered cohesionless, and should be considered free-flowing. Cohesion arises for high moisture contents and long storage times.

Angle of internal friction is based on the stress-strain relationship obtained from experiments as e.g. direct shear test. Investigations of granular materials have traditionally used a procedure proposed by Jenike (1964) with his direct shear apparatus. Stress-strain shearing curves for particular materials can differ substantially. The graph shows smooth curve that represented shearing of wheat flour, the curve with irregular oscillations illustrated shearing of salt, and the shearing curve of milk powder showed very regular oscillations. Cycles of hardening and weakening of the material in the narrow regions of shear zones are considered to be the source of the observed oscillations.

Cereal grains are clearly non-spherical. In the case of wheat, the length of grain is approximately twice its width. When grains are oriented in random and packed with uniform density the bedding is isotropic and homogeneous. When longest axes of grains are oriented along certain directions the bedding shows anisotropic properties. Its strength is different in different directions.
Slow rolling of grains along the cone of natural repose is an easy way to observe an example of formation of anisotropic bedding. Determination of the angle of internal friction with a triaxial shear test and a direct shear test have shown that the angle of internal friction increased with an increase in the angle between direction of preferred orientation of grains and the direction of sliding.

Unconfined yield stress is one of the basic parameters of granular materials. This parameter may be illustrated as the strength of material initially compacted in a closed die with normal pressure σ1, and later compressed after removing the that boundary confined the sample in the horizontal direction (see figure). The stress σc is termed the unconfined yield stress.

In practice, unconfined yield stress is determined from experimentally determined yield locus. The sc is influenced by the higher principal stress during consolidation σ1; higher σ1 results in a higher σc. The relationship σc(σ1) is termed the flow function, and its inclination is different for different materials. Based on the flow function, granular materials are classified in regard to their resistance to gravitational flow as: free-flowing, easy-flowing, cohesive and strongly cohesive. Flow functions are also used as an index of the quality of a granular material. Material flowability is frequently determined in-line as a control parameter during the manufacturing process.

The figure illustrates formation of a shear layer in the sample (cross section shown) of mustard seeds undergoing large deformation in a triaxial compression test. Samples were prepared of seeds of two different colors to form a checkerboard pattern in the longitudinal section. Samples with clearly formed shear layers were solidified with epoxy resin, cut in the direction perpendicular to the shear layer, and the distribution of displacements of grains of different dimensions and shape were analyzed. It was found that with increasing deformation the shear layer localized in a narrow zone of material. The thickness of shear layer was found independent on the grain dimensions and was found to be in the range from 12 to 16 grain diameters.