The response surface methodology (RSM)  was introduced by G. E. P. Box and K. B. Wilson in 1951. In statistics RSM (or IRS) depict the relationships between several explanatory variables and usually one response variables. The main idea of RSM is to use a sequence of designed experiments to obtain an optimal response.
Impact Response Surfaces (IRS) for crop models in the context of climate change
IRSs can be constructed for crop simulation models to evaluate impact of climate change (temperature, precipitation, CO2concentration) on yield. In particular, IRSs of spring and winter wheat yields were constructed using outputs from WOFOST and DNDC crop simulation models for three differing locations in Europe: Finland (northern, mainly temperature-limited), Spain (southern, mainly precipitation-limited) and Germany (central). The sensitivity of modelled yield to changes in temperature and precipitation was tested by modifying values of 1981-2010 baseline weather data systematically to span the range of changes projected for the late 21st century. Values of all other parameters were kept constant. Only a baseline CO2 level was considered (360ppm) and simplified assumptions made about soils and management with an aim to distinguish differences in model response attributable to climate. 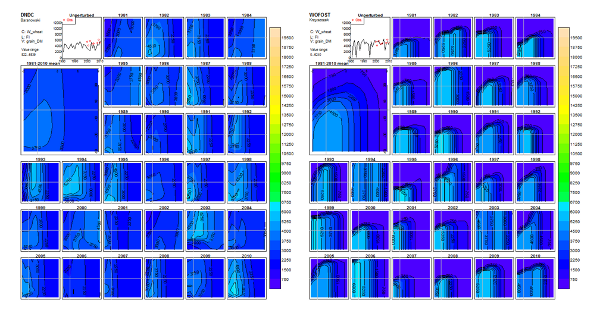